When I was hired at Le Figaro in 2012, I was in charge of the Figaro iOS and Android apps, among other projects. The apps had already been in place for years. At the time, the idea was to craft experiences that would match the OS, which meant that the iOS, Android (and even the Windows) apps looked pretty different, but provided the users an experience that made the most of the environment they knew most.

In 2015, we decided it was time for a makeover. This project took almost a year, between the very first sketches and the delivery. I've been working on it as a lead UX/UI designer. The idea was to create an app that would be cross-platform, so the readers of Le Figaro would be able to get the very same experience through all devices and really be able to immerse themselves in our universe.

Here's a little taste of how the iOS app looked before the redesign: 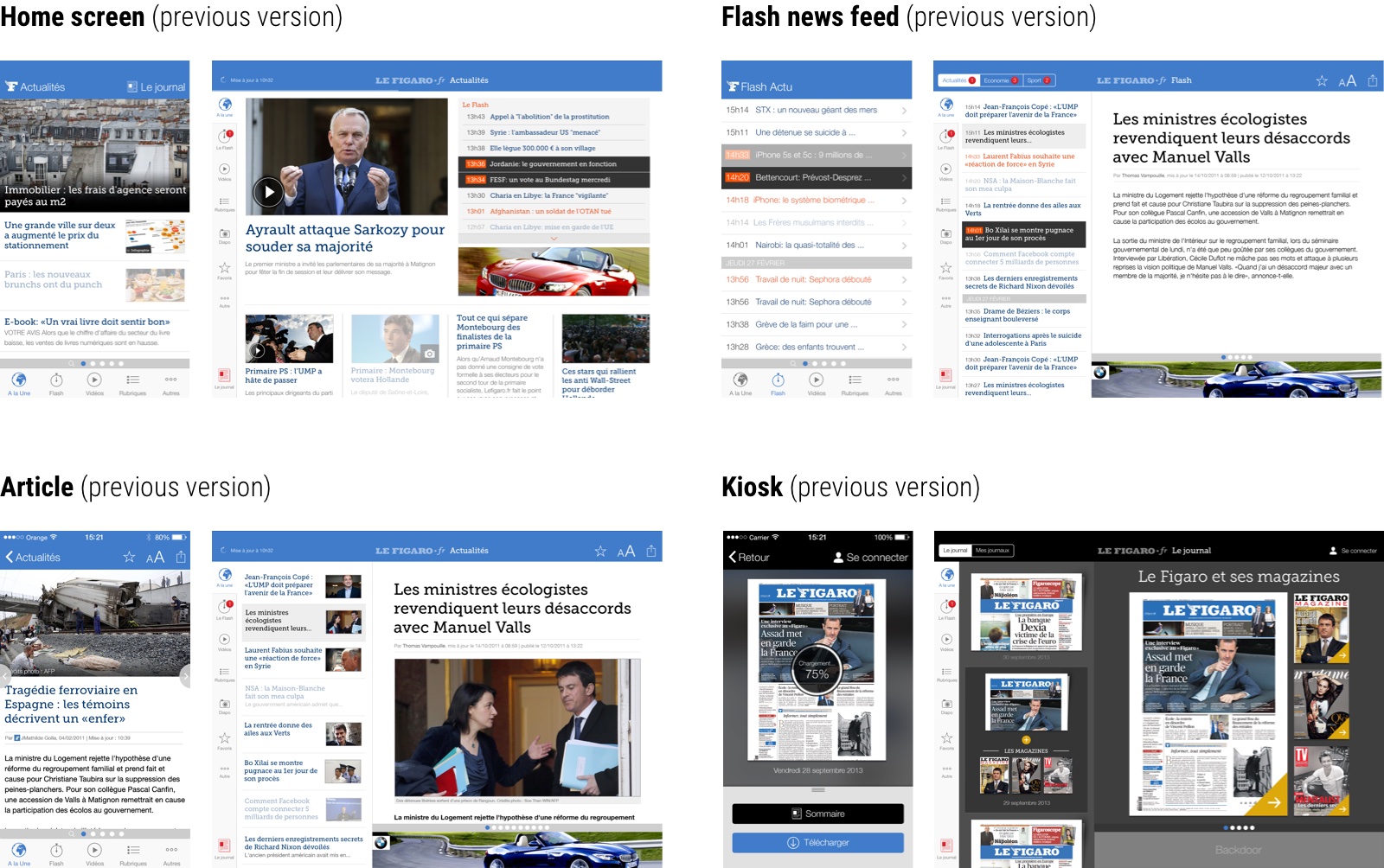 The app was launched in May 2016. In December 2016, the new Figaro app was nominated by Google in the "Best design" category during the "Best of 2016" event held on the Play Store. 🙌

why redesign the app?

figuring out the solutions

Aligning visions
Le Figaro is quite a big, old company, and when it comes to redesigning the newspaper app or website, you have to deal with A LOT of people. We were mainly working on the project with the Figaro mobile project manager and the devs.

But part of the challenge was also to include all of the stakeholders in the creative process. We organized workshops to get feedbacks from:
Gathering Data
What we knew about our product:
Benchmarking
Of course, we also reviewed what most of our competitors were doing at the time. As usual, the best inspirations came from abroad, especially with the NYTimes and The Guardian. Their contents were pretty innovative and offered a highly customizable experience.

We created the first wireframes, focusing on the Article, the News flash and the Home page.

User tests weren't as big a thing as they are now, so we didn't properly user-test with protocole, the good number of people and videos at each iteration. But we did test the usability of our screens whenever we had a doubt: we took a tablet or an iPhone, downloaded the screens and we would ask people around what they understood and if they had issues.

The new UI of the app relied heavily on visuals. Until then, pictures were pretty small. We wanted to take advantage of all those HD pictures we had, to offer a more immersive experience to our readers.

We also worked on the home screen to make the app more "live", by adding a special icon on the articles that had just been published and by creating a special place on the hp for the flash news (which were one of the most viewed screens on the previous version and which we wanted to bring a click/swiper closer to trigger even more page views).

We also worked on offering a more customizable user experience, just like The Guardian. The British newspaper offered a fully customizable home page, where the readers could get rid of some columns they weren't really interested in (e.g. if you didn't like sports, you could actually delete the section from your home screen without missing an important sports news whenever there was a major event). I and the design team tried to push the new app in the same direction, but the journalists really wanted to keep a screen that was fully curated by the editorial staff, so the fully customizable screen ended up being a secondary screen, accessible via a swipe.

To increase the number of page views, we also added more gesture-controlled navigation. Swiping left or right from an article actually brought you to the previous/next article. 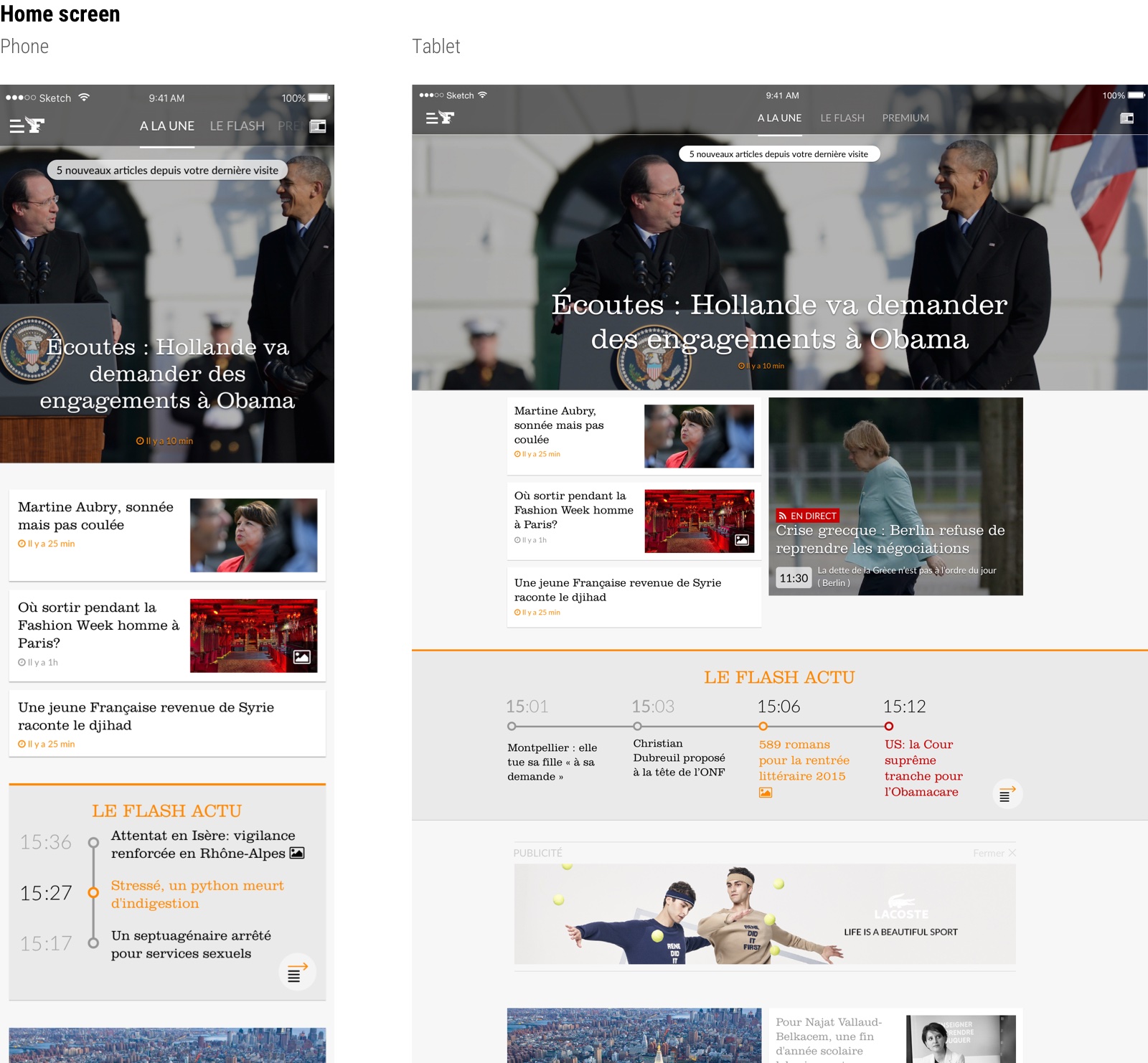 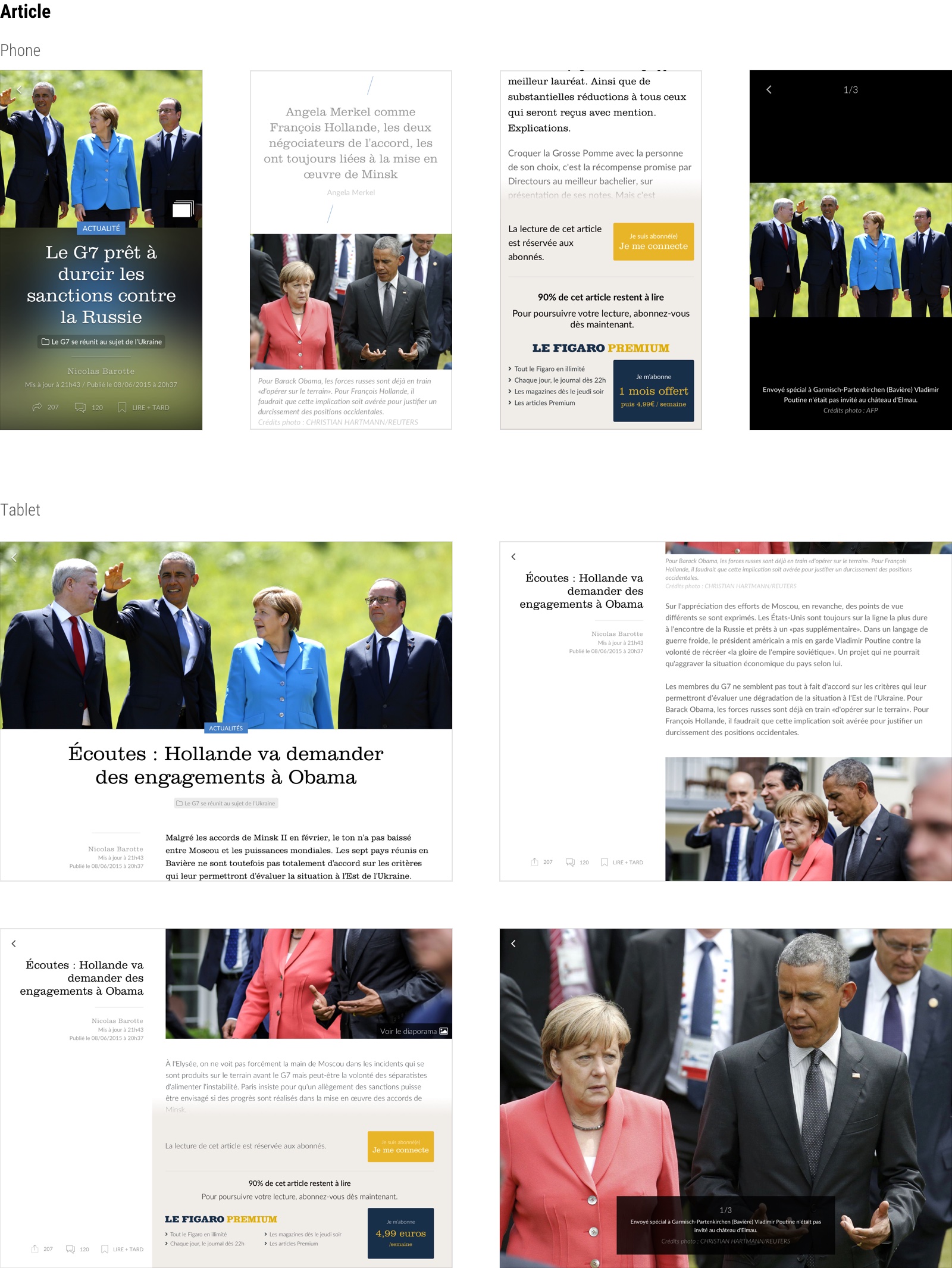 The redesign of this app was one of the most challenging projects I've ever been able to work on. I didn't want this case study to be as wordy as the whole Lord of the Rings trilogy, so I didn't write about all those meetings we held with C-level executives, that led to more or less changes.

Anyway, after all those year, this app remains one of the projects I'm the most proud of. I've learned many things along the way that have been really useful afterwards, especially about Material design and mobile app development.
Head back to home page